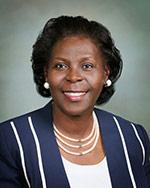 Justice Timmons-Goodson began her career as a District Manager of the United States Census Bureau in the Department of Commerce from 1979 to 1980. Her professional quest for justice began as an assistant prosecutor and continued as a legal services lawyer in Fayetteville, North Carolina.

Justice Timmons-Goodson is an active member of the American Bar Association, where she serves on the Editorial Board of the ABA Journal and the ABA Law School Accreditation Committee. She continues to invest her energies in North Carolina by serving on the Guilford College Board of Trustees, The Fayetteville Chapter of Links, Incorporated and the Board of Directors of the North Carolina Civil War Center. Justice Timmons-Goodson received her B.A. and J.D. from the University of North Carolina at Chapel Hill and an L.L.M. from Duke University Law School.