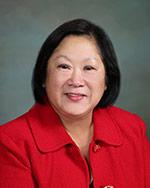 She previously served as president and executive director of Asian Americans Advancing Justice | AAJC, one of the nation's premier civil rights organizations. Prior to that she was the Washington Representative for the Japanese American Citizens League (JACL). And before JACL, she was an attorney with Perkins Coie. Ms. Narasaki began her career as a law clerk for Judge Harry Pregerson of the U.S. Court of Appeals for the Ninth Circuit from 1985 to 1986.

She has served on many boards and commissions throughout her career, including Vice Chair of the Leadership Conference on Civil and Human Rights, Chair of the Rights Working Group, and Chair of the Asian American Diversity Advisory Council for Comcast/NBCU. She was a board member for Common Cause, the Lawyers Committee for Civil Rights Under Law, Independent Sector, the National Adult Literacy Commission, National Immigration Law Center and the National Asian Pacific American Bar Association. Ms. Narasaki received a B.A. from Yale College, magna cum Laude, and a J.D. from the University of California, Los Angeles School of Law, Order of the Coif.